Harmlessly passing your time in the grassland away,
Only dimly aware of a certain unease in the air.
You better watch out!
There may be dogs about!
I’ve looked over Jordan and I have seen;
Things are not what they seem.

What do you get for pretending the danger’s not real?
Meek and obedient you follow the leader
Down well trodden corridors into the valley of steel.
What a surprise!
A look of terminal shock in your eyes!
Now things are really what they seem;
No, this is no bad dream.

— The first two stanzas of the song “Sheep”, by Pink Floyd, from their 1977 album Animals. 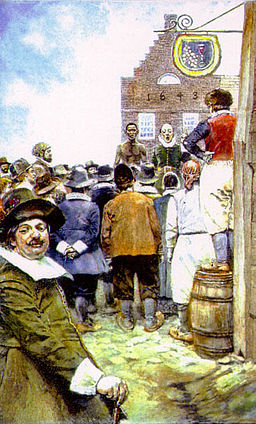 The First Slave Auction in New Amsterdam [New York City] in 1655, an illustration by Howard Pyle (1853-1911), published in 1917 after his death. Slave or master, master or slave, it has been ever thus.
Why listen to or read reports from corporate media outlets about what the comedian Michelle Wolf said at the White House Correspondents Dinner on Saturday, April 28, when C-SPAN has the entire video of her speech available so that you can make up your own mind about it?
Warning: foul language; also, self-congratulatory shills.
There has never been an age when information was as freely available in relatively open societies such as ours, and yet people out of laziness, habit, or ideology continue to rely on corporate media to relay news to them. Corporate media has a bias, though, and ultimately that bias has less to do with left or right than it does with green, as in the color of American currency. The part of Ms. Wolf’s remarks that the corporate media objects to most has nothing to do with what she says in the first sixteen minutes, largely about Supreme Leader, his incompetent administration, and the morally or legally corrupt officials in it, including press secretary Sarah Huckabee Sanders, but about her criticisms of their ethically bankrupt empowering of this administration for the sake of lining their own pockets. There are reaction shots of stuffed shirt audience members either stony faced or sour pussed in disapproval throughout Ms. Wolf’s remarks, but in the last three minutes, and especially the last minute, when she takes it up a notch, the reaction shots show media and administration types alike shooting daggers at her from their eyes. You know then she was speaking the truth, and that they weren’t going to report that part of her speech if they could avoid it.

Brit Floyd, a Pink Floyd tribute band, in an excellent performance of “Sheep” from 2015 in Amsterdam, The Netherlands.

But allowing lazy, dishonest media to get away with reporting like that are lazy, dishonest citizens who don’t care about the truth. And it doesn’t have to be that way. Criticizing the media is easy really, like shooting fish in a barrel. Who swallows the bait when they boost the weapons of mass destruction myth as reason for invading Iraq? Who goes along meekly when the corporate media repeats the lie from the powers that be that the banks and other financial institutions who nearly destroyed the economy in 2008, and did destroy the livelihood of millions of citizens, are too big to fail and require a bailout from the same people they screwed? Who listened and watched enraptured as the corporate media gave more coverage to a reality TV star presidential candidate in 2016 than any other candidate, regardless of substantive discussion of real issues? Who?

Who was born in a house full of pain?
Who was trained not to spit in the fan?
Who was told what to do by the man?
Who was broken by trained personnel?
Who was fitted with collar and chain?
Who was given a pat on the back?
Who was breaking away from the pack?
Who was only a stranger at home?
Who was ground down in the end?
Who was found dead on the phone?
Who was dragged down by the stone?

Neither Here nor There

October 1, 2017 Editor
The crudity and vindictiveness of Supreme Leader’s response to criticisms of his lackadaisical leadership in disaster recovery efforts for Puerto Rico after Hurricane Maria has been startling even for him, a crude and vindictive man. Certainly racism and sexism play a part, as they do in much of his behavior, but in this case there is the disquieting sense there is something more at work, and as is often the case, it helps to follow the money. 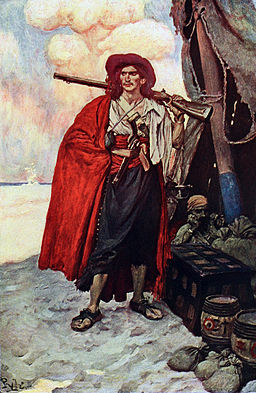 The Buccaneer Was a Picturesque Fellow, a 1905 painting by Howard Pyle (1853-1911) used as an illustration in Howard Pyle’s Book of Pirates: Fiction, Fact & Fancy Concerning the Buccaneers & Marooners of the Spanish Main.
Supreme Leader dropped the clue himself when he referred to Puerto Rico’s high debt load, adding that the Puerto Ricans must nonetheless continue to repay their debts despite their currently dire situation. What an odd thing to mention in discussion of relief efforts for a population struggling for survival! Did he mean those words to be taken to heart by the Puerto Ricans, who now have more pressing worries? No, not as much as he meant his words to reassure the holders of Puerto Rico’s over 70 billion dollars’ worth of promissory notes on Wall Street.

At the 18th hole of the AT&T National Pro-Am Tournament in 2006, Supreme Leader (not his title then) leans on his golf club. The pirates have exchanged their muskets for golf clubs. Photo by Steve Jurvetson.
Puerto Rico has no representatives in Congress and no votes in the Electoral College. It is a territory, and while its people are citizens of the United States, they have no say in federal matters relating to their island. On June 11, 2017, Puerto Ricans voted overwhelmingly in favor of statehood, but the decision to make Puerto Rico a state still resides with Congress. Most Puerto Ricans identify as Democrats, and since both house of Congress currently are controlled by Republicans, it is unlikely Puerto Rico will see a change in its political status anytime soon. The island’s people are effectively second-class citizens; to become first-class citizens, they must either make their island one of the United States, or entirely independent.

Mainland political interests are against Puerto Rico statehood, and there are also economic interests against it, such as large corporations and Wall Street banks that seek to continue plundering the island, an activity made easier by Puerto Rico existing politically between the devil and the deep blue sea. Who cares if the Puerto Ricans are suffering in the aftermath of Hurricanes Irma and Maria, which have piled on to an economic recession which started for them over ten years ago and has continued to worsen? Certainly not sociopaths like Supreme Leader and his economic advisors Gary Cohn and Treasury Secretary Steven Mnuchin, both formerly of Wall Street.

The damage caused by Supreme Leader, Steven Mnuchin, Gary Cohn, and other members of our ruling class is far more deplorable than what Monty Python depicted in this TV sketch, but still it helps to ridicule them.

It’s not as if Puerto Rico has 38 electoral votes like Texas, where Hurricane Harvey landed, or 29 like Florida, where Hurricane Irma continued its devastation after leaving the Caribbean islands, or even 3 votes like the District of Columbia, with its population otherwise shut out of federal representation but for those 3 measly electoral college votes. Puerto Ricans have zero votes. Not one vote in the electoral college, in the House of Representatives, or in the Senate. No one speaks for them. Thanks to its colonial relationship to the United States, however, there is money to be pillaged from its poor and working class people, and what’s left of its dwindling middle class. That’s why Supreme Leader acted the way he did, and tweeted what he tweeted, because he was looking out for himself and his cronies, and that’s his real constituency. Why would he care one way or the other about the Puerto Ricans?
― Ed.