Back in 2014, after New York City police officer Daniel Pantaleo put Eric Garner in a choke hold, which along with compression of the asthmatic Garner’s chest from having Pantaleo on top of him when he was on the ground, led to Garner’s death, a grand jury in Richmond County on Staten Island, where the altercation took place, refused to indict Pantaleo even though the medical examiner had ruled Garner’s death a homicide. Police were trying to arrest Mr. Garner in July for selling loose cigarettes. Eleven times Mr. Garner protested “I can’t breathe!” Officer Pantaleo pushed Mr. Garner’s face into the pavement. A bystander filmed everything using his cell phone.

After the grand jury decision in December, 2014, not to indict Officer Pantaleo, protests erupted in New York City and elsewhere around the country. Later that month a man shot and killed two New York City police officers, possibly in revenge for the grand jury decision. At the funeral for one of the officers, many New York City police turned their backs on Mayor Bill de Blasio when he delivered a eulogy, believing his public condemnation of Officer Pantaleo’s actions earlier in the year led to the murder of their two colleagues. The police officers’ feelings on the matter were inflamed by the rhetoric of their union leader, Patrick Lynch. 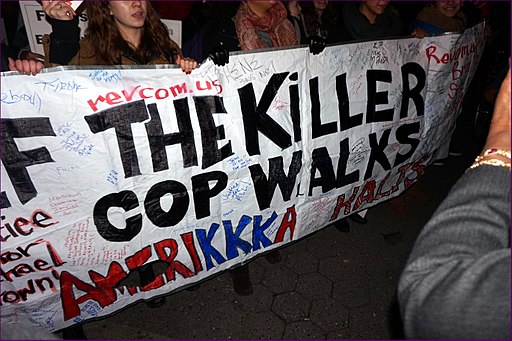 “No Justice, No Peace”; the Eric Garner Protest on 4 December 2014 in Manhattan, New York City. Photo by The All-Nite Images.
It’s not as if the murder of Eric Garner by a New York City police officer was an isolated incident, an anomaly. There had already been a long history of overly aggressive police tactics, particularly against minorities, aggravated in recent years by the unconstitutional and demeaning “stop and frisk” tactic, also particularly used against minorities. Mayor de Blasio criticized some police tactics during his campaign for office, and that did not set well with Patrick Lynch. When Mr. de Blasio became mayor at the beginning of 2014, tensions between himself and much of the police force were high, and after his public comments about the Eric Garner murder, the stage was set for a confrontation.
In a few incidents since then, some New York City police officers have expressed their displeasure with the Mayor by turning their backs on him in public. They have exercised their First Amendment rights to free expression while in uniform, on the taxpayers’ dime. Very well. That is nonetheless within their rights. Their protest, however, in its petulant contempt for the mayor, overlooks the role of one of their own, Officer Pantaleo, in touching off all the criticism of them and of how they too often are unaccountable when they abuse their power.

The nationwide protests of the grand jury decision were a criticism of abusive police power louder than anything Mayor de Blasio ever said. In turning their backs on him, the police were turning their backs on all Americans who were fed up with their abuses. The police, egged on by the bellicose Patrick Lynch, were attacking the messenger, Mayor de Blasio, rather than examining their own complicity in the retaliation that resulted in the deaths of their colleagues. Everyone has a right to protest, to express in public their criticism of policies and tactics they abhor. That is honorable. It is not equivalent to the public expression of grievance over criticism that you shouldn’t kill someone because he doesn’t like being harassed for selling loose cigarettes on the sidewalk.
― Vita

“He who passively accepts evil is as much involved in it as he who helps to perpetrate it.”
― Martin Luther King, Jr.