Growing Up Is Hard to Do

November 19, 2017 Vita Historia
If in early 1977 you had dropped off for a long sleep and, like Rip Van Winkle, awakened many years later, in this case late in 2017, and you were an avid moviegoer, you would find many changes in the types of movies that were popular in the different eras. Some of the biggest changes would have come about because of Star Wars (1977) which was released shortly after you nodded off, and was the first successful movie with “B” movie themes made on an “A” movie budget, and because of Batman (1989), which was the first successful movie to take a comic book character seriously.
Now in 2017 those types of movies have all but crowded out the big budget movies with adult themes that the major studios used to make, the prestige pictures like Lawrence of Arabia (1962) and Doctor Zhivago (1965) that David Lean directed, as well as other pictures by directors such as Francis Ford Coppola and Martin Scorsese. A few prestige pictures still somehow get made and released each year, but most movies with adult themes are small budget, mostly independently produced affairs that have a limited run in movie theaters before going to a movie rental service. The big money in Hollywood goes mostly to comic book superhero movies, “B” movies made with “A” movie money, and they take themselves very seriously. 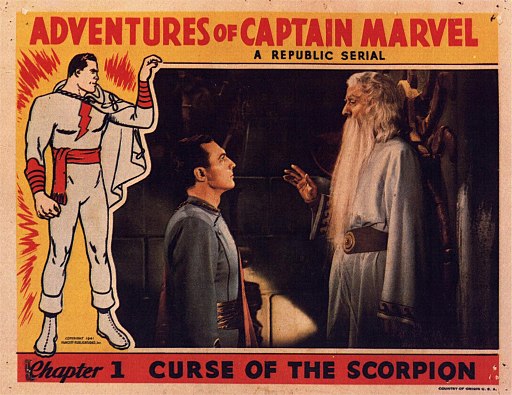 A promotional poster for the 1941 serial Adventures of Captain Marvel, with Tom Tyler on the left and Nigel De Brulier on the right. Serials like this would not even have had the status of “B” movie, since they were usually only about twenty minutes long instead of feature length, though their production values were just as cheap.
When Star Wars first came out in theaters, its director, George Lucas, knew perfectly well he was borrowing themes and story lines from old “B” movie adventure serials, and he reveled in those corny conventions with a wink at the audience, who understood the whole thing was a kitschy romp. Similarly for Lucas’s friend, Steven Spielberg, several years later when he directed Raiders of the Lost Ark (1981), an adventure yarn based entirely on the cheap movie serials of the 1930s and 1940s. George Lucas was the executive producer on that film, and both he and Spielberg, talented filmmakers who were steeped in old film lore, were like kids playing in a very expensive sandbox. Those movies made a lot of money, but still no one took their stories too seriously.
That changed with the release of Batman in 1989, directed by Tim Burton, who claimed he was never particularly enamored of comic books, but who wanted to take the tone of his film far from the campy take on the comic book superhero of the 1960s television show. Burton nonetheless injected some tongue in cheek bits into his movie, mostly in Jack Nicholson’s portrayal of the Joker, though that may have been as much Nicholson’s interpretation as Burton’s. The movie was a huge success, and studios took note of how intent the fan base was on seeing a serious treatment of the subject when the fans followed every rumor about the film’s production, especially the casting of Michael Keaton, known at that time mostly for comedic roles, as Bruce Wayne/Batman. Comic book fans were upset that the casting of Keaton hinted the film would be another campy treatment, like the 1960s television series. 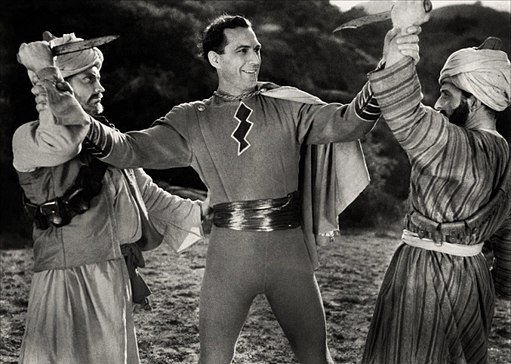 A publicity still from the 1941 serial Adventures of Captain Marvel, starring Tom Tyler as Captain Marvel, here beset by two pesky foreigners.
When those same fans went to theaters and saw just how deadly serious Keaton’s Batman was, they were delighted. Ever since then, Hollywood has been ladling up more and more deadly serious comic book superhero movies to that fan base, who appear to be insatiable. Since Computer Generated Imagery (CGI) has achieved convincing results rendering the fantastic world of comic books over the past ten or fifteen years, movie producers have tripped over each other turning out more of these movies. All that CGI isn’t cheap, and a comic book movie can cost upwards of 100 million dollars to make. With a worldwide release, however, and all the merchandising tie-ins that comic book superheroes lend themselves to, a film studio can pull in upwards of one billion dollars from each movie.

A scene from the 1960s Batman television series, starring Adam West as Bruce Wayne/Batman and Burt Ward as Dick Grayson/Robin, that points to the silliness at the heart of the dual identity superhero premise.

Lawrence of Arabia probably did not generate enough merchandising to be worth mentioning. It was also a complex character study, and therefore did not have the broadest possible appeal. Comic book movies do not have the broadest possible appeal, either, but they have a broader appeal than the old prestige pictures that asked some maturity of their audiences in order to understand their themes. Is this what we want? It is apparently what the portion of the public with generous amounts of disposable income and low expectations wants when they go to the multiplex, because comic book movies have come to dominate the marquee listings. It would be nice if more new prestige pictures made it onto the marquee, because those are movies worth paying to see on the big screen, and in a theater with a terrific sound system. For those moviegoers, unfortunately, these are times of poor pickings, and they might as well stay at home to watch movies on their own setup, or take a long snooze, waking up in forty years to see if “A” and “B” movies have returned to their rightful order in the alphabet.
― Vita 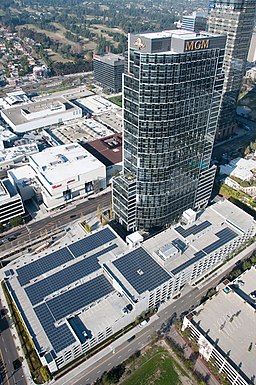