Why We Can’t Have Nice Things

Private companies have been making their electric scooters available for riders to share in cities around the United States and in Europe over the past two years, and the results are a mixed bag. Riders appear to appreciate the service, even if some of them don’t show that appreciation in how they ride or park the e-scooters. City governments appear to like that the service fills gaps in their often inadequate public mass transit services, even though they are learning that more regulation is required of e-scooter companies to rein in their sometimes arrogant disregard for city ordinances and of inconsiderate riders whose behavior can be a public nuisance. Members of the public who have no personal need for the e-scooters are largely tolerant of their presence in their cities, but in many places they are finding their patience tested by the problems mentioned above.


The technology behind e-scooters and smartphones or, in some places, simple cellular phones, makes the business model of sharing e-scooters in a city possible. An e-scooter rigged for sharing has a Global Positioning System (GPS) module and an inexpensive, basic cellular connection for small amounts of data transfer to communicate its exact position and condition. A lithium ion battery provides power. A rider needs to use the internet application provided by the company for use on a smartphone to unlock the e-scooter and provide for payment for the service. Some localities insist as a condition for operating in their city that e-scooter companies make the service available to people without a data connection on a simple cellular phone. One of the ideas behind the service, after all, is to provide a low cost transportation option for poor people. 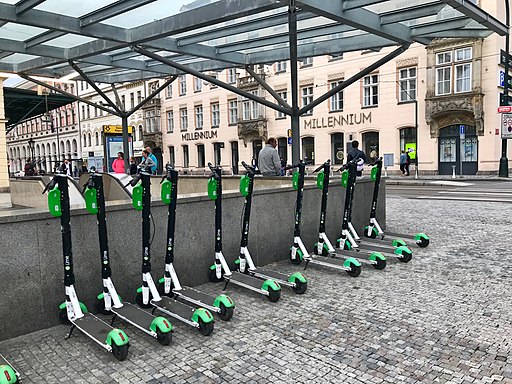 Lime e-scooters parked next to a subway entrance at Masaryk train station in Prague, Czech Republic. Photo by Martin2035.


The problems arise because, like all private services which take advantage of the public commons, there are abuses. The private companies either do not seek out and pay for permission to park their e-scooters on public property or they may not hold up their end of agreements they have with cities that allow their operations. Since the e-scooters do not belong to them, some riders are unconcerned about how they use them or park them. Equipment abuse is the lookout of the company operating the service, but the abuse of the commons caused by careless parking is a public nuisance at best, a menace at worst. Crime problems have arisen mostly from overnight vandalism of the equipment and from the dangers to workers who must go out at night to find and maintain the equipment.

Bringing e-scooters into cities is a good idea on its surface, and they solve a mobility problem for some poor people or for commuters without cars who find using them more appealing than walking or biking. But with the problems their presence and use are causing by abuse of the commons, it would be better if cities improved their mass transit systems instead. For one thing, e-scooters are not as ecologically benign overall as people may assume, and certainly not in comparison to mass transit options. For another, solving the problems encountered during the initial rollout of e-scooter sharing programs would appear to take up public resources in the form of tighter regulation and consequent enforcement. Wouldn’t it be easier in that case to regulate a comparatively smaller number of mass transit units and operators rather than thousands or tens of thousands of e-scooter units and operators strewn all over a city?

E-scooter sharing programs may last only a year or two more if the current abuses continue, and that’s a shame because many decent people who appreciate the services and have a dearth of other options would probably like to see them continue. Unfortunately this business model appears to go against human nature in that where the commons are concerned, there are always enough bad faith users around to take unfair or inconsiderate advantage of the situation and eventually push the public at large to demand an end to it for everyone. In the words of James Madison, “If men were angels, no government would be necessary.”
— Techly

Through a Glass Darkly

December 7, 2018 Editor
“11 When I was a child, I spake as a child, I understood as a child, I thought as a child: but when I became a man, I put away childish things.
12 For now we see through a glass, darkly; but then face to face: now I know in part; but then shall I know even as also I am known.
13 And now abideth faith, hope, charity, these three; but the greatest of these is charity.”
— The Apostle Paul in a letter to the Corinthians, 1 Corinthians 13:11-13, from the King James Version of the Bible.

DNA kits are very popular now, both for people ordering them for themselves and for those giving them as gifts. Sales of kits doubled in 2017 over all previous years, and have increased again in 2018 over 2017. Interest appears to derive mostly from curiosity about immediate ancestors, on which the kits do a good job of enlightening people, and secondarily about genetic health risks, on which the kits dealing with the subject deliver mixed results, needing confirmation from a medical professional. 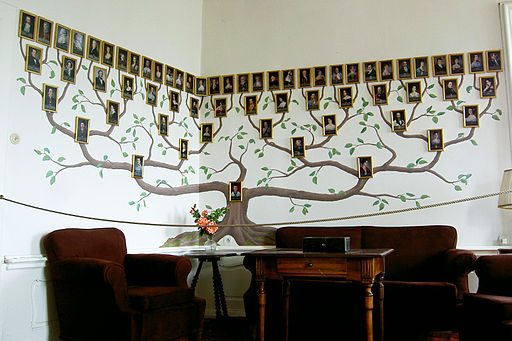 Portraits of six generations of the Sternberg family in Jiří Sternberg’s study, Český Šternberk Castle, Czech Republic. Photo by takato marui. Tracing ancestry is easier in the pure bred lines and close quarters of Old Europe than in the melange of ethnicities and transcontinental migrations of the New World.
Compared to the ethnic homogeneity of most Old World countries, Americans are mutts, and the melting pot was particularly active in the years of heavy immigration from Europe from the mid-nineteenth century to the early twentieth century. Africans brought into the country as slaves until the Civil War eventually made up a larger proportion of the total population through that period than they have since, averaging close to 20 percent of the total for the first hundred years of the republic, and settling to a range of 11 to 13 percent of the total population afterward. It shouldn’t therefore surprise white people taking DNA tests to discover they have at least a small percentage of relatively recent African ancestry.

It is interesting, however, that DNA test results for black people yield an average of 25 percent European ancestry. It is not surprising there has been mixing of the races, despite laws against miscegenation going back centuries, but that black people have a much higher percentage of European ancestry than white people have a percentage of African ancestry, and yet black people are still and always considered black. This is Pudd’nhead Wilson territory, in which even a tiny percentage of African blood is tantamount to an entirely African genetic heritage. In America, once a person has been accepted into white society, it requires a considerable amount of African genetic input, along with other factors involving economics and relationships, for a person to fall from grace, as it were, from whiteness to blackness. 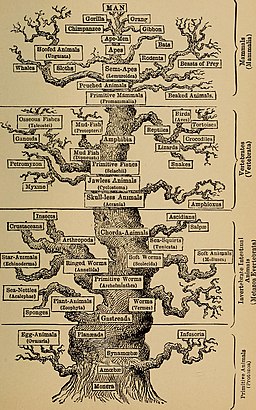 In this 1896 illustration by Ernst Haeckel (1834-1919), “Man” is precariously at the top of a tree encompassing all life on earth.
The grade has always been uphill, on the other hand, for black people to be accepted into American society, always predominantly white, no matter how much they were genetically European. Initial branding of blackness meant staying black in the eyes of white society until extraordinary circumstances or subterfuge intervened. In all this, what the majority of people, black and white, seemed to have missed was that racial differences were minuscule, along the lines of one half of one percent of the genetics every human being shares. Race itself is an artificial concept, a social construct, rather than a real biological divider.
It’s all in the mind, and those who would reinforce race as a divider of the human species have to perform mental and ethical gymnastics to justify their beliefs since science won’t do it for them. The idea that DNA test results with some percentage of African ancestry are showing merely what goes back millions of years for all of humanity also does not hold up. Yes, everyone on earth does have common ancestors in Africa, but that is not what the makers of DNA home test kits design them to illustrate, since they typically only research genetic relations going back several centuries, that being within the time frame for which they have reliably detailed information on background in their databases.

The immigration scene of young Vito Corleone, played by Oreste Baldini, in Francis Ford Coppola’s 1974 film The Godfather: Part II. Unlike Vito Corleone when he matured, the majority of immigrants, then as now, do not end up engaged in dangerous and unlawful activities, despite what rabble rousing politicians want everyone to believe.

There also appears to be an assumption among even open-minded white people that since Africa is the cradle of all humanity, then Africans themselves must be genetically closer to that cradle than the rest who emigrated to far continents. African ancestry noted in the DNA test results must, they reason, be hearkening back to long ago ancestors white people share with everyone on earth. No. The test results show genetic input from recent African ancestors. And those recent African ancestors have evolved along with everyone else on earth, including Europeans, triggered by similar environmental and social changes pushing them to adapt. The European discoverers should not be so quick to flatter themselves with ideas of inherent superiority that they lose sight of how other societies have adapted quite well under unique circumstances without prizing discovery and conquest above all else as the sine qua non of human existence.
— Ed. 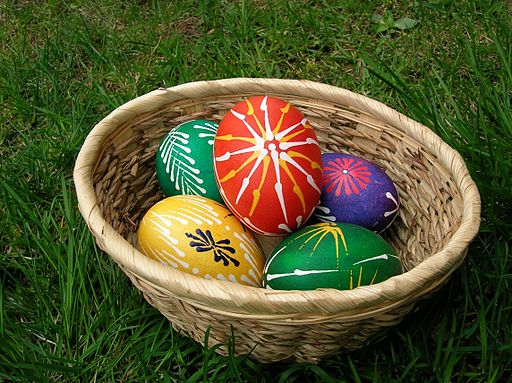 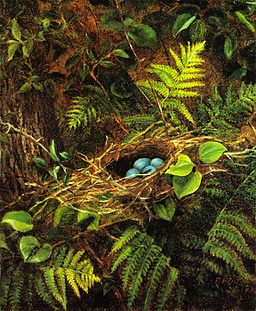 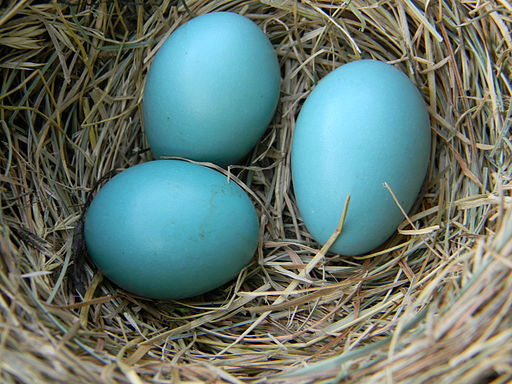