With a Song in My Heart 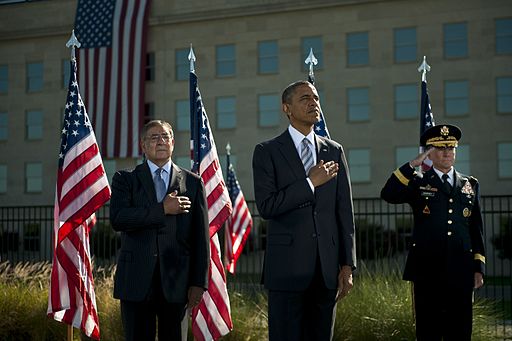 Secretary of Defense Leon E. Panetta, left, President Barack Obama and Army Gen. Martin E. Dempsey, chairman of the Joint Chiefs of Staff, render honors during the playing the National Anthem during a ceremony commemorating the 11th anniversary of the Sept. 11, 2001 terrorist attacks on the Pentagon.

The recent flap over U.S. Olympic gymnast Gabby Douglas not placing her hand over her heart during the playing of the “The Star-Spangled Banner” at the Rio Summer Olympics medal ceremony prompts this week’s post. Etiquette for citizens during the national anthem is spelled out in U.S. Code, but that’s the extent of it. Civilians should place their hands over their hearts, and military personnel in uniform should salute. Veterans can place their hands over their hearts or salute, as they wish. There are no legal prohibitions for civilians who do not observe etiquette, whether knowingly or out of ignorance. Any deviation from etiquette by civilians is protected by the First Amendment to the Constitution. Military personnel who do not salute may be prosecuted non-judicially by their command under Article 15 of the Uniform Code of Military Justice.

The upshot of all this is that for most Americans their behavior during the national anthem is guided by custom, though in this case custom has been explicitly codified by Congress, as questionable as that practice may be. As with all matters of custom, those who deviate from the norm open themselves to criticism and opprobrium from the community at large. In the case of Gabby Douglas, public censure goes too far, and certainly legal sanctions are inapplicable, no matter how much people may howl on Twitter about what they perceive as her inappropriate lapse. The rush to judgment is just that, a hasty reaching for the first stone.

American sprinters Tommie Smith and John Carlos, along with Australian Peter Norman, during the award ceremony of the 200 m race at the Mexican Olympic games. During the awards ceremony, Smith (center) and Carlos protested against racial discrimination: they went barefoot on the podium and listened to their anthem bowing their heads and raising a fist with a black glove. Mexico City, Mexico, 1968.