July 28, 2019 Isidore Gnome
“It ill becomes us to invoke in our daily prayers the blessings of God, the Compassionate, if we in turn will not practice elementary compassion towards our fellow creatures.”
— Mahatma Gandhi (1869-1948)

Anyone who has ever been a vegetarian or vegan even for a short time has probably at some point encountered hostility from a meat eater, perhaps on several occasions from many different people. The experience can be baffling, particularly if the vegetarian or vegan does not make a big show of their practices. Self-righteous and preachy behavior can be annoying, certainly, but even when a vegetarian or vegan abstains from being a smug boor, some meat eaters will attack them as if they had been. A couple of recent news items help illustrate the innate hostility some people harbor for those who don’t adhere to mainstream dietary practices, even though it’s no one’s business but their own and the majority of them do not go out of their way to bother anyone.

Arby’s, an American fast food chain specializing in roast beef sandwiches, has come out with turkey meat processed to look like a bloated carrot, and in London two men have been found guilty of disorderly behavior after they ate raw squirrels in front of a vegan food stand. The actions of both Arby’s and the London squirrel eaters are obvious attempts to troll vegetarians and vegans, and their reasons for doing so say more about their own stunted mentality than anything else. Arby’s has for some time used an advertising slogan which proudly declares their enthusiasm for meat, and plenty of it. It is a fair guess that even if the political culture of Arby’s management is not necessarily right wing, they do assess their customer base as right wing, and trolling the perceived political correctness of their fast food competitors who have lately been offering vegetarian menu options is a good way to appeal to them. 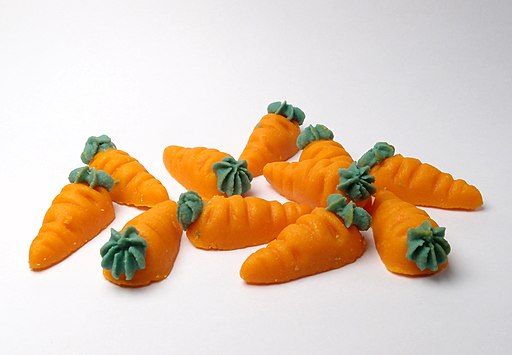 Marzipan carrots for carrot cake. Marzipan consists primarily of almond paste and sugar or honey, and vegetarians would partake of it, though if honey were in it, vegans would not. Photo by SKopp.
Like everything else in our society, there is a political division in people’s dietary choices. Vegetarians and vegans are mostly liberals. Other liberals who are meat eaters are more likely to react to alternative diets with indifference or polite curiosity. At any rate, most of them do not perceive vegetarians and vegans as threats. Not so political conservatives, particularly those with authoritarian leanings. The difference is so striking that it can almost be used as a reliable indicator of political beliefs: hostility to diets at variance with the mainstream is a good clue that a person might be right wing. Often these people will appoint themselves to keep an eye on vegetarians and vegans for backsliding, no matter how innocuous their target is about minding their own business and not actively posing a threat to them. If threats are not real, they will be imagined! We have met the enemy, and it is Them, the Others!

Nothing delights these self-appointed guardians of imagined societal standards more than catching a vegetarian or worse, a vegan (and therefore probably a liberal!) in an act of perceived hypocrisy, because then they can denounce the entire belief system and not be bothered anymore by any of its implications, such as cruelty to animals or environmental degradation. A problem ignored is a problem solved! Meat eaters who worry about the perceived sanctimonious behavior of non-meat eaters occasionally like to bring up the supposed fact of Adolf Hitler’s vegetarianism, as if the actions and beliefs of one ogre tarnish all vegetarians. That is like suggesting the beliefs and actions of all Christians are suspect simply because some white evangelical Christian leaders are terrible human beings.

In this Merrie Melodies cartoon from 1947, Bugs Bunny and Elmer Fudd are at odds with each other as always, and the cartoon finishes with action that for its time was considered normal.

It is interesting to note that in dealing with hostility from some meat eaters, non-meat eaters discover they can assuage the unease of their interrogators when they ask about the reasons for their choice by stressing the healthful benefits over the other issues. That approach is not entirely dishonest, since there are real benefits for human health in foregoing or at least restricting meat eating. The American diet of meat with nearly every meal is not the most healthful, nor is it the historical norm. Most Americans could stand to reduce their consumption of meat, and in doing so they would benefit their own health as well the health of the environment and the quality of life for billions of animals. It is interesting and sad to note that of the three primary benefits of an alternative diet, only the first sets well with right wing authoritarians, and only on account of selfish reasoning.
— Izzy