September 19, 2017 Isidore Gnome
The craft beer industry has expanded since the 1980s from a handful of breweries to thousands, increasing consumer choices along the way and boosting local economies over the profits of huge corporations. In the 1970s, the brewery industry in the United States was diminishing to fewer choices for consumers as small, local breweries went out of business or were bought out by larger competitors, and their distinctive brands of beer disappeared.

The effect could be seen in national television advertising of the time, where only a few big brands could afford to compete. Even the beers on sale that did not appear to be sub-brands of the major players were not much different than them in flavor and makeup, only in price, usually being cheaper knock offs. To get a taste of something different and a little better in the late 1970s, American beer drinkers turned to European imports. The beer market had become like the wine market, where American brands were viewed as okay for everyday drinking, while the European product was considered superior in quality.

That started to change in the early 1980s with the startup of some local craft breweries that eventually gained national prominence, notably Anchor Steam and Sierra Nevada in northern California. American beer drinkers once again had a choice among domestic varieties, even as the biggest national brands became more than that, expanding into multinational corporations. The return of local and regional breweries, and in a few cases breweries that reached a national market, added consumer options because the new breweries were not interested in competing with the multinational outfits in producing the same old watery lagers. 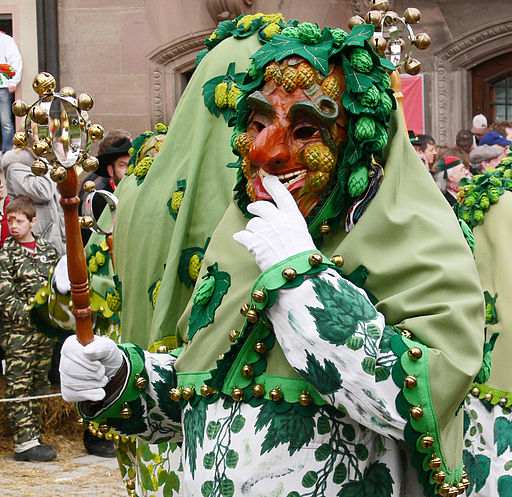 A figure decorated in representations of hops at a festival in Germany in 2006. Photo by Andreas Praefcke.
A funny thing happened, however, on the way to a new land of craft breweries specially tended by artisans who labored as much for their own enjoyment as that of their appreciative customers. For one thing, the big multinationals took note of the new phenomenon, also known as competition, and decided that unlike how they had bought up small competitors in the decades before the 1980s and subsumed the competitors’ operations within their own, they would now ride the craft brewery wave by retaining all the packaging, logos, and lingo of the smaller outfits when buying them out. Consumers would be none the wiser as they made their selection in the store, and when they got home and cracked open one of their favorite “craft” beers they still might not notice the difference, despite changes in brewing and bottling facility practices, particularly if the consumer’s taste buds were swayed more by psychological factors than by honest opinion.

The other thing that has skewed the craft beer movement is the tendency for snobs and macho men to take over and ruin the fun for some of us. The same culture that has made spicy food its domain seems to appeal to a minority of brewers and beer drinkers who always want to competitively up the ante on the hoppy bitterness of craft beers. That wouldn’t be that bad if it weren’t for the unfortunate side effect that these people tend to be snobs with undue influence on some consumers. “It’s so bitterly hoppy that it’s undrinkable,” the brow-beaten craft beer supporter complains. “Drink it and enjoy it, or you’re a philistine,” exclaims the snobby beer person, a category that didn’t exist until twenty years ago.

Beer Wars, a 2009 documentary by Anat Baron that examines how the big breweries have co-opted the market share of many smaller breweries.

Such people have been around for ages, trying to belittle others who are susceptible to their nonsense, all so that they can then feel more exalted in their self-proclaimed expertise. They’re usually men, and they have haunted wine circles in this country long before beer became a drink of anyone other than the common people. You can find them in restaurants which specialize in spicy foods, such as Thai, Indian, or Mexican, always advocating for heat regardless of flavor, because that’s the manly thing, you sissy. In a somewhat different way, they are also familiars of the online gaming community, and of computers in general, and long before that, when know-it-all males were still accustomed to getting their knuckles dirty with grease, the world of automobiles and mechanical contrivances.

Never mind them. The great thing about the craft beer movement of the last thirty years is that there are brewers now producing beers for every taste. If you still can’t find what you like, then the staple lagers of the big multinationals will always be available. Drink those if that’s your thing. If you do like the beers of the craft breweries, though, and you like the idea of supporting smaller businesses, please do read the fine print around the back of that cardboard six-pack package to make sure your dollars are going where you intend, and not into the coffers of the big watery lager breweries, pretending to be what they’re not.
― Izzy