“Some people are born on third base and go through life thinking they hit a triple.”
― Barry Switzer, U.S. football coach.

In 1976, the movie Network satirized the television business of the day and projected then current trends into the future, to extremes that at the time seemed preposterous. A reality show about terrorists? A planned assassination filmed live on television? Too much! Satire turned into fantasy! Looking back from over forty years later, we realize maybe it wasn’t too much. Maybe it was prophetic. 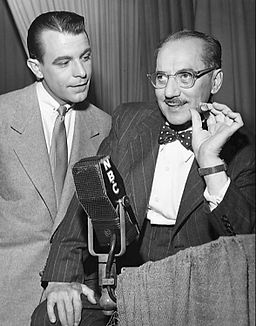 George Fenneman and Groucho Marx
on “You Bet Your Life” in 1951, a quiz show
where the financial stakes weren’t as
important as entertaining conversation.
Thirteen years before Network appeared in theaters, the psychologist Stanley Milgram conducted an experiment at Yale University that tested how far subjects would go in administering electric shocks to other people they thought were also subjects of the experiment, but who in fact were actors. It turned out that when directed by authority figures (also actors), two thirds of the subjects giving shocks escalated the punishment to 460 volts, which is severe to the point of being dangerously debilitating. In 2010, a game show aired in France which re-enacted the parameters of the Milgram experiment in the name of televised entertainment. The producers later revealed that the show was in fact a fictitious re-enactment, with no one harmed, but most of the participants did not know that while the show was in production, nor did the studio audience. In the French game show, 80% of the subjects delivering shocks escalated them to 460 volts.

A 2012 experiment designed by the psychologist Paul Piff at the University of California-Berkeley had subjects play the board game “Monopoly,” with the rules changed to allow one subject to enjoy advantages throughout the game. The methodology and results of the experiment appear to indicate we do not so much learn the haughtiness of economic privilege as have the capacity already within us, waiting only for the switches of power and money to activate it. Economic inequality in the United States has burgeoned since the 1970s when the fictitious mad TV news anchor, Howard Beale, ranted about the inequities in American society, and the divergence between the haves and have nots has only increased since then.

The point where the 2010 French game show and the 2012 “Monopoly” experiment intersect is in describing what has become acceptable behavior for people seeking fame and fortune. Forty or fifty years ago, before YouTube and Instagram and Twitter and Facebook, fame and fortune were as like as not obtainable only after a long slog of work for most, and certainly it was rare to become an overnight sensation. Now we see that most people have sloughed off the diffidence and decorum they had when appearing in public in the age before instantaneous media saturation. Now it seems many people feel little restraint in satisfying their thirst for fame and fortune, no matter how ignominiously won, and will cast off all restraint when egged on by peers or authority figures. Now conscientiousness and civility have become quaint afterthoughts.
― Vita