September 16, 2018 Techly DoRight
Many folks may remember that as children they were admonished by their elders not to sit too close to the television because they would strain their eyes. If a child was a reader, a parent or other elder would express concern that the reading light wasn’t bright enough. If a child read in bed after lights out, then a concerned elder would issue a warning of punishment for staying up too late, in addition to concern about eye strain. Of course, this scenario is dated because children today may be reading from a backlit screen instead of a paper book. New technology, same worries about eye strain. 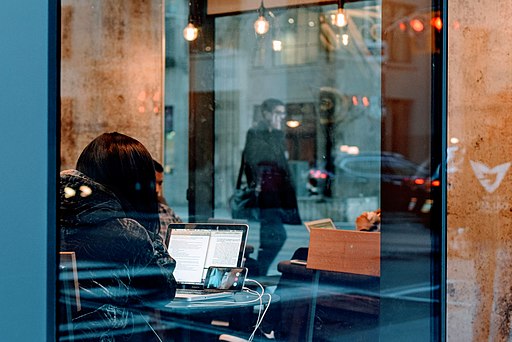 View from a street in Toronto, Canada, into a building where a woman looks at her laptop computer and smartphone. Photo by Tim Gouw.
Asthenopia is the medical term for eye strain, and in a chronic case the condition can be a concern worthy of a visit to a doctor. With the prevalence of computer, tablet, and smartphone use now, adults are as apt to have asthenopia as children who don’t heed their parents’ warnings. Few people admit to reading from their smartphone or tablet in bed after dark, but most probably do it, because for one thing it’s an easy way to read without disrupting a partner’s sleep, even if it may disrupt their own sleep habits. Looking for hours at a time into a relatively bright light from a foot or two away, or perhaps mere inches, is a sure path to eye strain.
Other than changing behavior, the solution starts with turning down the brightness on all those screens, including the television. Most devices now come with sensors that detect room brightness and adjust the device brightness accordingly. A darkened room will require less brightness from the device in order for the user to comfortably view the screen. Find that control and use it. Next, devices made specifically for reading at close range, such as smartphones and tablets, may have a “Reader” mode in the display settings. Find that and turn it on. Some internet browsers also come equipped with a “Reader” mode.

Finally, if those native adjustments are insufficient to tone down the blue part of the spectrum, which is the part most responsible for causing eye strain, then seek out a third party application for computers, smartphones, and tablets that will shift the color temperature from blue to red, with many degrees in between. Such applications have timers built in order to shift the color temperature gradually as day moves to night, and vice versa. They take some getting used to, but after a day or two the warmer color temperature will feel natural and less noticeable. Your eyes will sense the difference, though, since they will no longer be asthenopic, a word which is such a strain to pronounce it’s just as well you no longer have to deal with it.
— Techly