December 26, 2017 Vita Historia
Now that Christmas is past, shoppers will be out looking for bargains as retailers slash prices in an attempt to clear inventory off their books before the end of the year. That brings up the subject of pricing, which beyond the obvious need to cover costs and generate profits, leaves some leeway in the ongoing, never ending psychological games between sellers and buyers.
Why $9.99 instead of $10.00? What about the typesetting of that $9.99? Is $9.99 better? How about 9.99, dropping entirely the suggestion that the seller is asking for real money from the buyer? Gas stations price fuel at even finer increments, using tenths of a cent, such as $2.299/10 per gallon. These pricing systems seem like they have been around forever, and it’s surprising to learn they are no older than 150 years, and in the case of gasoline pricing no older than the 1920s or 1930s. 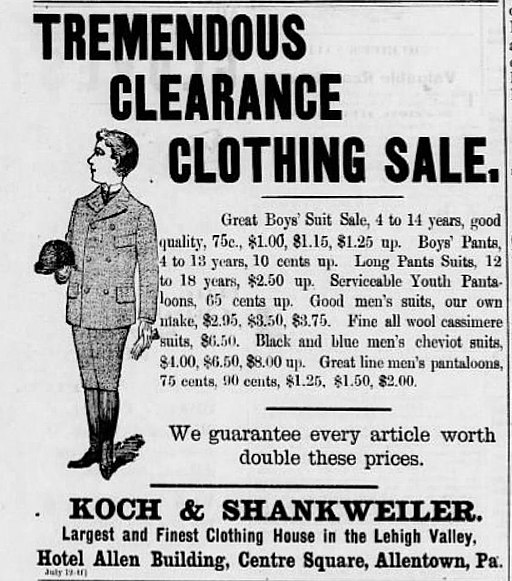 An 1894 newspaper advertisement for Koch & Shankweiler clothiers in Allentown, Pennsylvania. The fractional pricing is almost all in quarter dollar increments.
Retailers started pricing items at fractions of a dollar rather than rounding the price to the nearest dollar in the late nineteenth century partly in response to inflation which raised their costs past one dollar for many things, and partly to convey to shoppers that they were getting a bargain. When inflation raised the cost of most items in a department store past a dollar, some retailers responded by rounding up the price to the consumer to the next dollar, while others retained fractions in their pricing. Eventually the retailers who retained fractions found they sold more than the retailers who rounded up, and the same principle applied to items within their own stores where they tried the different tactics. For reasons that psychologists and sellers dispute to this day, buyers like fractions of a dollar in pricing, and they respond by purchasing those items over the ones that are priced at rounded dollars, even though those prices may be only one cent higher. 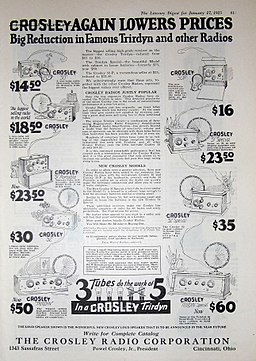 A Crosley Radio advertisement in a 1925 edition of The Literary Digest. Prices were at whole dollars or at half dollar fractions, underscoring how even in the early twentieth century fractional pricing was uncommon. Photo from Flickr user Joe Haupt.
At first retailers thought fractional pricing attracted bargain shoppers, and therefore they used the tactic principally for sale items. By the 1920s, however, fractional pricing became commonplace throughout retail marketing, regardless of whether items were on sale or not. The one area where sellers rarely use fractional pricing is for high profile, luxury items, presumably because those shoppers look down on bargain hunting, and because at a certain high dollar amount adding a fraction to the end of the price becomes ludicrous. The only aspect that needed fine tuning was the exact fraction that worked best as a compromise for sellers and buyers. It appears that fractions in the ninetieth percentile have worked best, which is why prices at half dollar fractions, which were once popular, are rarer now than they once were.
As for gas stations’ pricing fuel down to tenths of a cent, that practice dates to the 1920s and 1930s when government entities first started taxing gasoline to raise money for road building and maintenance. The government taxed the fuel sellers, and the sellers passed the cost on to consumers. When gasoline cost ten or fifteen cents per gallon as it did in those times, it made sense to fine tune fractional pricing down to tenths of a cent. The business of selling gasoline retail has always run on slim margins, which is why those businesses have always diversified, first by offering automobile mechanical services, and now more commonly by selling convenience items at a high markup. Gasoline retailers have learned that consumers will drive a mile down the road to save a penny a gallon on fuel, and since the gasoline on offer is essentially a loss leader for the higher priced items the retailer sells, it makes sense even in these times of fuel prices in the range of dollars for retailers to retain the tenth of a cent fractional pricing that could make the difference in their profitability from month to month.

The 1980 comedy Used Cars, directed by Robert Zemeckis, included this television advertisement for one way of dealing with high prices. Note that the Mercedes luxury car price is rounded to $24,000. Warning: foul language.

The latest development in the continuing tug of war between sellers and buyers that deserves mention is the one in which grocers have challenged the math skills of shoppers beyond simply rounding fractions off to the nearest dollar by posing more complicated division skills, such as 4/10.00, 5/12.50, or 10/16.90. These are not terribly difficult math problems, and many people would not need a calculator to figure them out. This pricing ploy is instead an attempt by the retailer to get the consumer to buy more of the item not only by suggesting it is a great value, but also by confusion over what the price is per unit.

Particularly when the consumer has to compare one item priced in such a manner to a similar item priced in the same way, the laziness and confusion of the shopper works to the advantage of the retailer. In that case, even buyers who do not have a calculator with them should take comfort in understanding that by law in most places they do not have to pick up the suggested amount in order to take advantage of the advertised price. A “Buy one, bet one free” promotion, for example, does not necessarily require the shopper to pick up two items in order to receive the benefit of buying only one item at half price. As always, however, caveat emptor – buyer beware – and check with the store manager to be sure of the applicable policy.
― Vita