What Time Is It?

August 11, 2017 Techly DoRight
This week the Supreme Leader of North Korea and the Supreme Leader of the United States traded more schoolyard threats in their ongoing spitting contest, with the specter of nuclear war hanging in the balance. These two strange hair baby men really should sort out their differences between themselves and leave everyone else alone to go about their business. In January, the Bulletin of the Atomic Scientists published their annual Doomsday Clock, and they had moved the minutes hand up from three minutes to midnight in 2016 to two and a half minutes to midnight this year (they do not use a seconds hand, only hours and minutes). The scientists cited the possibility of just the kind of belligerence we witnessed this week. They know their Supreme Leaders inside out.
The scientists responsible for setting the hands on the Doomsday Clock do it only once a year, in January, and therefore we must guess what the hands would read right now if they were inclined to change them. Certainly closer to midnight. The last occasion for setting the hands this close to midnight was during the coldest part of the Cold War in the Eisenhower administration. At that time, nuclear proliferation was not what it is now, and the major concern for confrontation was between the United States and the Soviet Union. The Soviet Union was led by Nikita Kruschev, a colorful man but certainly more mentally stable than Kim Jong-un, the current Supreme Leader of North Korea. There is no comparison worth making between Dwight Eisenhower and the current Supreme Leader of the United States other than Eisenhower enjoyed golf and so does the new fellow, apparently to the exclusion of doing his job. 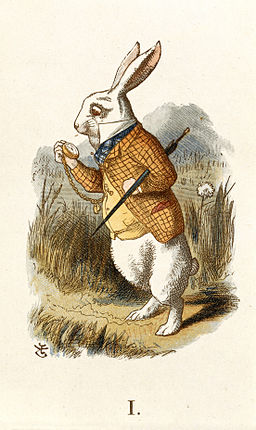 In this illustration by John Tenniel (1820-1914), the White Rabbit anxiously checks his pocket watch shortly before disappearing down the rabbit hole, followed by Alice, in the first chapter of Alice in Wonderland, by Lewis Carroll (1832-1898).
Back to the clock, when the hands were near midnight in the 1950s, the leaders of the time understood the risks. Both had seen the devastation of war up close. There is not that sense with the two leaders facing off now. Both are spoiled, privileged inheritance babies who want their own way no matter what pain it may cause others. The pain and suffering of others is not even part of the equation for them. Will Rogers, the homespun American humorist of the early twentieth century, had a comment about Congress which applies well to both Supreme Leaders in the current confrontation: “This country has come to feel the same when Congress is in session as when the baby gets hold of a hammer.” Time is running out.
― Techly